Fox is a beautiful creature, but it doesn’t make a good pet due to its free and cunning nature. Fortunately, numerous genetic and physical traits of dogs and foxes are quite similar to each other. If you are looking for a pet, the dog breeds that resemble foxes are a much better alternative. Below is a list of 10 foxy dogs that you can adopt.

Alaskan Klee Kai was originally bred in the 1970s as a lap-sized husky. Despite their association, these dogs are not as welcoming as huskies. They are very friendly towards owners but remain alert around strangers. This smart and energetic dog breed loves to play around with you.

They come in different colors, like black, red, grey, and white. However, the red Alaskan Klee Kai has a striking resemblance to foxes. Therefore, if you want a fox as a pet, it’s ideal to go with the red and white Alaskan Klee Kai.

The Finnish Spitz, as the name suggests, is a popular dog breed from Finland. These fox dogs were bred as bird-hunters and are known for attracting prey with their slow wagging tails. They are also good at making ‘yodeling’ sounds, and this has earned them the name ‘Barking Bird Dog’.

Finnish Spitz resembles foxes in appearance and has the same cunning nature. This dog breed requires a lot of exercise to maintain its physical and mental health. They make wonderful companions because of their loving attitude towards their families.

The Vikings developed this Spit-type dog, in Iceland, over a thousand years ago. These beautiful dogs were bred for herding. Icelandic Sheepdogs come in both long and short-haired variants, and both of them resemble foxes. Their narrow face looks very similar to a fox’s face with their upright ears.

This dog breed is quite active and needs regular exercise. Although they are very friendly, they must be socialized at an early stage. Otherwise, they may tend to run away from other people and animals.

The history of the Japanese Spitz is unclear because all the records were wiped out during World War II. However, the breed looks like it descended from Keeshonds and German Spitz. These gorgeous dogs are ideal for adventurous people.

The Japanese Spitz resembles Arctic foxes because of their strikingly white coat. Likewise, the pointy nose and black eyes make them even more similar to foxes. These fox dogs are great companions and adapt quickly to their living space. Whether they have to stay indoors at home or live in a wide countryside, they always seem to adjust.

This dog breed got its name from the place of its origin, the Jindo Island in Korea. They were originally developed as hunting dogs and lived alongside the inhabitants of the island. Interestingly, a Korean Jindo also took part in the opening ceremony of the 1988 Olympics. The red-colored Jindo resembles foxes and the tan-colored variant looks a lot like Asian Red Foxes.

Jindo is cunning, smart, and stubborn. However, they are extremely loyal and are very loving towards their owners. This dog breed also needs a lot of exercise and can become moody if sufficient physical activity is NOT provided.

If you want a pet that looks like a small fox, this is the perfect dog breed for you. Chihuahuas are one of the smallest dogs in the world. However, do not fall for their small size because their attitude can match any large breed.

The long-haired Chihuahuas resemble small red foxes. They are extremely intelligent and love to be in the company of their family members. They do not require much grooming and quickly adapt to different living spaces. Chihuahuas come in numerous colors, but the red one looks just like a little fox!

This tiny, long-bodied breed was a popular choice for herding. These dogs are hard-working, intelligent, and clever, just like foxes. Pembroke Welsh Corgis can be traced back to Queen Elizabeth II as her prized dogs. These fox dogs are loving companions and are always excited to go on long walks. Due to its love for outdoor activities, Welsh Corgi is often regarded as an ideal companion for active families.

Schipperke is a small dog that is known for attracting attention wherever they go. They were developed as hardworking ship dogs, but they also love to catch rodents. The modern Schipperke still retains this trait and will chase anything that moves. The ship crews loved this breed and this is why it was named “Schipperke”, which means “Little Captain”.

This Belgian breed looks exactly like a black fox because of their pointed nose and upright ears. They can live easily in apartments, but you will have to take care of their rather mischievous and stubborn nature. Likewise, the ridiculous amount of barking can be a problem for your neighbors.

Shiba Inus looks a lot like small foxes and are equally strong-willed. Despite its small size, this is a stubborn and hardworking breed. However, they can be a bit harder to train because of their intelligence and independent nature. They are also quite courageous, but aggression can become an issue for strangers (if not trained properly).

This is another Spitz-type dog breed that makes the list. Volpino Italiano originated from Italy and their name means “Italian Foxy”. They were bred as guard dogs and the modern Volpino Italiano retains its energetic and lively nature.

They strongly resemble the white Arctic Fox, and you will be hard-pressed to find any discernable differences between the two. Volpino Italiano are also very loyal, which makes them a great addition to any family. 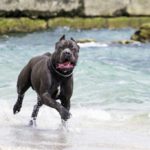 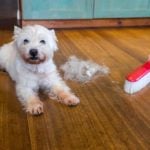 Popular Stories Right now
What does Dog Nail Discoloration Mean?
How to Cook Fish for Dogs – 5 Simple Fish Recipes for Dogs
How & When to Cut Puppies’ Nails for the First Time – A Complete Guide