We have all heard that time-old expression about people fighting like cats and dogs, but when it all really boils down to it, is that actually an apt metaphor? Are cats and dogs truly born to be mortal enemies? Dependent upon your stance, the truth might shock you – and that answer is going to be a resounding no. Dogs are not ingrained with hatred for cats and the same is true vice versa (for the most part anyway). While a few breeds might be more inclined to have a dislike for cats, most are not inherently opposed to befriending them.
Most dogs, if given the right training and environment, can get along with most animals. But, and it’s a rather large one, a dog’s personality is just as individualized as our own. Some dogs are bound to be more comfortable with a cat than others and the same goes the other way round. Don’t force a relationship where one isn’t wanted. With enough time given, they will likely come to tolerate each other. You don’t have to particularly like someone to live in harmony with them – just ask anyone that deals with an annoying coworker. Guaranteed, all of your four-legged family members love you enough to at least make an effort.
We have compiled a list of 7 large dog breeds that are good with cats.

German Shepherds are well known for their guard dog capabilities, however, being a companion animal is where these big guys shine – and that includes companionship for all of Earth’s creatures.
While these dogs can be trained to be more aggressive to smaller animals (or criminals, for that matter), they are more likely to be pals with our kitty friends, especially those that they spend time with regularly. This is due in large part to their incredible intelligence. They are one the smartest breeds and as such, can usually be trained to be a friend with the household cat.

This big-boned boys’ calm and laid back demeanor means that he gets along with everyone – both the two-legged and four-legged variety alike. They tend to be quite friendly and enjoy giving affection, sharing their slobbery saliva to all who’ll allow it. Standing between 23 and 28 inches, and weighing up to 110 lbs, their size can pose a risk so the new friends should be supervised to prevent accidental injury.

The temperament of the English Setter alone makes it an ideal candidate for being kitty’s new comrade. Because they are a hunting breed, socialization, and proper training is super important, starting from puppyhood if at all possible.
They are brilliant dogs so they learn fairly easily and quickly. As a hunting breed, they are prone to chasing animals that aren’t as big as him, so keep them leashed when around cats or other critters. Especially those that are unknown to them but you can expect them to be very protective and loving to their own furry family members regardless of species.

They are the lovable polar bears of the dog world. Strictly due to their massively large size – more than 100 lbs when fully grown, the Great Pyrenees can certainly seem an imposing figure, however, that couldn’t be farther from the truth.
These white and fluffy majestic beasts typically have the sweetest temperament. They are loyal, protective, and loving, and that applies to their animal friends too. Other than the danger of being sat on, your cat and this dog will become fast and lifelong friends before you know it.

The Labrador isn’t considered America’s most popular family pet for no reason. These dogs are not only extremely smart but they also always seem to have the best disposition. They tend to get along quite well with everyone and anyone and are fairly easy to train. They can be quite energetic so an injury is possible – until they are comfortable with each other interactions between the two should be supervised.

This splendid blend of Poodle and Labrador is all you could ever want in a family pet. Intelligent, sweet, friendly, and easily trained, these dogs are a terrific option for homes with cats. They are fairly well-known for their incredible ability to co-exist with cats.
They grow to be pretty large, up to 24 inches in height and around 65 lbs, so playtime should be supervised to avoid injury to the smaller party. Other than that, these two furballs will most likely end up being fur-friends for life.

Although his sleek and graceful looks are likely to be the reason he initially caught your attention, well, that and those big, soulful chocolatey brown eyes, the Boxer’s personality is pretty awesome as well. They are very loving but they also very much enjoy vigorous daily playtime – and they have no preference for their chosen playmate (cat, dog, unicorn – he’s an equal opportunity fur-pal). The one factor to keep in mind, however, is that this breed does have an instinctual predatory drive so a proper introduction, as well as efficient training, is imperative for a friendly relationship. 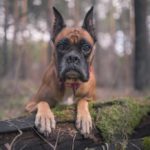 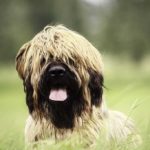