Dogs are serving in almost all fields of our life and wars are no different. In the past, dogs have been used in wars for different kinds of jobs, like tracking and transporting medical equipment. Many of those canines are the unsung heroes because of their over-aggressive contribution. The following are some dog breeds that are used in wars for various services.

Airedale Terriers have high intelligence with extraordinary ego and intense look. These hot minded pups don’t like to have a stranger around them and can be very difficult to handle. However, they are quick learners who love to receive commands from their people.

Airedale Terriers were declared a marvelous war dog in World War I. They are used for search-and-rescue missions because of their loyalty and great sniffing ability. Likewise, they are also used for carrying military equipment.

These pups are perfect for accessing small places where big canines can’t reach. These little pooches were originally bred to hunt larger hares. They have a superb common sense and are always ready to learn new things.

Beagles have an excellent sense of smell. This is one of the main reasons why this breed was introduced in the military. For tracking and detection of bombs, the Pocket Beagle is better.

The dogs of this breed appear quite similar to German Shepherds. These canines are very trustworthy, intelligent, and can be trained without putting in a lot of effort. Belgian Malinois are very popular for their speed and agility. The size of these dogs makes them a good war zone breed because they are easy to handle.

Belgian Malinois are also very good for military services because of their quick reflexes. They can play a vital role in managing dangerous conditions during the war. These canines can be used for detection (of bombs or arms), searching (of enemies or companion), and patrolling.

This breed is popular for herding, hunting, and bull-baiting. Likewise, Boxers also do considerably well in dog sports. They are intelligent, loyal, strong, and have a lot of energy. All these traits make them suitable for being used in wars.

Being a multipurpose breed, Boxer is one of the most popular and desired breeds for war services. These dogs perform a wide range of roles in the military, including messenger, guide, and patrol dog. They have also been used for detection and searching purposes in wars.

This dog breed is known for its loyalty and has great protective abilities. Doberman Pinschers are smart and very easy to train. They have quite a history of being war dogs because they were used in both WWI and WWII.

Dobermans are very sharp that makes this breed ideal for scouting and/or patrolling. Additionally, they can also perform different tasks, like guarding, searching, and detecting mines or hidden bombs.

Dogs of this breed are actually an all-rounder because they can deliver services in different fields. German Shepherds have a muscular and strong body, with a terrifying appearance. These fast learners are highly trainable and remain calm in unfriendly places.

German Shepherds were also used in World War I because of their outstanding abilities. They performed all kinds of tasks, ranging from working as messengers to searching enemies. They are suitable for working in risky and stressful situations that make them the best option for the military.

Giant Schnauzers are the biggest of the Schnauzer breed. In the beginning, this breed was used for driving cattle and protection. These canines can be a little hot-headed, but they are extremely loyal and smart. Due to their snobbish personality, it is quite natural that they suspect strangers.

Giant Schnauzers were used by the Soviets in World War I as well as World War II. This is the ONLY dog breed that also serves in the Air force. They have also served in wars as patrol and detection dogs for mines and arms. All of this was made possible due to their unique skills, like air detection and good obedience.

Although they are used for different purposes, Labs were originally developed for saving hunted fouls. These extremely trainable canines have a very good sense of smell (sniffing power). They are friendly and have a reactive personality.

Labrador Retrievers are perfect for law implementation tasks because of their incredibly high obedience. They are often spotted at military centers because of their other combatting abilities, like searching, detecting, and patrolling. In addition to that, they can also help in controlling the combat stress of soldiers.

This large dog breed was developed for guarding. They are very loving and loyal to their handlers but can be a little reserved with strangers. These canines have all the qualities (confidence, intelligence, and obedience) to be used in wars.

Rottweilers were mostly used as a messenger dog for secure communication in both the World Wars. Nowadays, these canines play a vital role in the military as a search and detection dog. 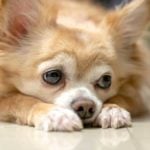 Popular Stories Right now
10 Hypoallergenic Mixed Breeds
How to Cook Fish for Dogs – 5 Simple Fish Recipes for Dogs
How Much Chicken and Rice for Dogs by Weight?