German Shepherds and Labradors are two of the most liked canines in the world. Labrador Retriever is highly sociable and sportive while the German shepherd is smart and ardent. Both these dogs are supreme in their respective departments and it’s hard to declare which one is better. However, we have compared the key features of both breeds to make your decision a little easier.

This breed is believed to have been developed in the 1830s when St. Johns Water Dogs were first introduced to Britain. They were transported through ships that were used for trading between Canada and Poole in Dorsetshire. These dogs were then mixed with British hunting dogs to produce what we call today the Labrador Retriever.

Labs have a well-built body with a medium-large stature. When fully grown, they weigh from 50 to 80 pounds with a height of up to 21.5-24.5 inches. These dogs have a well-balanced structure of legs and spine. Their proportionate shape is often described as ‘short coupled’. Labrador Retrievers generally come in three colors, black, chocolate brown, and yellow.

This is a well-known breed of working and guard dogs that originated in Germany, in 1899. They are also known as the Alsatian dog because this name was widely used after World War I. Max von Stephanite, an ex-cavalry officer, created this breed by mixing several working sheepdogs from rural Germany. The aim was to create a shepherd dog that has high stamina for herding the cattle.

The standard size of a male GSD is 23-26 inches, and it can weigh up to 75-90 pounds. On the other hand, females are 21.5-23.5 inches tall and weigh up to 55-70 pounds. These dogs have stout and elongated bodies. Likewise, they have a very sturdy and muscular buildup that is ideal for serving as guard dogs. These pups come in a variety of colors, like black, black & tan, and red & black.

The following table shows marked differences between these breeds.

Trainability – Both these breeds are quick and obedient learners. They always tend to please you and follow your commands.

Intellect – As far as intelligence is concerned, these dogs are brilliant. They will always mesmerize you with their intellect.

Sensitivity – Both breeds are very sensitive and can get touchy soon if their routines are disturbed. Noisy households and frequent guest visits can also be troublesome in some cases.

Suitable for Kids – Both these canines are safe for kids and love to play with them.

Services – Both GSDs and Labradors can serve as therapy dogs, detection and sniffer dogs, and search and rescue (SAR) dogs.

Sleeping needs – Both these breeds are quite active and will need only a little slumber time to recharge themselves.

Energy Level – Both breeds are highly energetic and have a lot of stamina.

What is Better about Labrador Retriever?

Labrador Retrievers are the least aggressive and highly amicable dogs. Their active and playful demeanor won’t let any family member get bored. These dogs are highly sociable and love to see new faces and interact with them. You can really brag in public about the social skills of your Lab.

If you want to contest a dog in dog shows and sports, there is none better than a Labrador Retriever. They can sprint, jump, swim, and do well in intellectual games. Moreover, the breed is among the least hypoallergenic purebreds. Hence, it requires less grooming due to its short and hard coat.

What is Better about German Shepherd?

German shepherds are utterly loyal and loving to members of the pack (family). They are capable watchdogs and guard dogs and won’t hesitate to risk their life while protecting their family. Their square-cut muzzle, strong jaws, and muscular body can easily haunt the intruders. While they are amiable with family members, they stay watchful and wary of strangers. They won’t let anyone enter your premises until you command them to do so.

They are exceptionally obedient and will never go against your command. Labs, on the other hand, can be stubborn sometimes due to their independent nature. GSDs are among the fastest canines as their strong legs can help them sprint at 48 kilometers per hour. That’s why they have always been an active part of rescue federations and the army.

Who Should Get Labrador Retriever?

If your family is active and has kids, Labrador is the perfect option for you. They can also be great for families with a large social circle where they have to meet many people. With labs, you can take part in all sorts of dog competitions. It is worth mentioning that Labs require plenty of space to play freely. So, if you live in an apartment or small cottage, Labrador won’t get along well.

Who Should Get German Shepherd?

German shepherds are calmer as compared to labs. They don’t ask for too much space, but they do better in medium-sized homes. However, they can be conditioned to live in an apartment by justifying their exercise requirements.

If you are a part of a rescue team, police, or army, a German Shepherd is the best service companion. Generally, GSDs are considered better for senior citizens than kids. 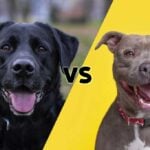 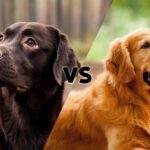 Popular Stories Right now
10 Hypoallergenic Mixed Breeds
What does Dog Nail Discoloration Mean?
How & When to Cut Puppies’ Nails for the First Time – A Complete Guide